The force behind DrumChops.com and the DrumChops Drum School is Lou Stavris.  Lou has been the sole proprietor & Instructor guiding both through various iterations since the Late 90’s.  The history of how DrumChops.com came to be and the twists and turns it has taken over the years is both interesting and a testament to the two most important things in Lou’s life: Family and Drumming!

Lou grew up in New Haven, Ct and was destined to be a drummer from the start.  In fact, it was the family business!  Lou’s Father, Jimmie Stavris Sr., was a Master Drum Instructor who taught over 2500 students in a career that spanned close to 40 years.  Lou’s Uncle, Nick Forte and his older brother Jim Stavris Jr. both studied with his Dad as well and are still playing and teaching in the Connecticut area.  Nick is the Owner of Forte Music Publications and has written over a dozen drum method books as well as having numerous articles published in national magazines such as Modern Drummer and Down Beat.  Lou’s brother Jim started lessons at age 3, played his first pro gig at 7, and through his teens made All-State two years in a row, as well as the McDonald’s All-American band just to name a few of his early accomplishments.

Lou decided to take a different path and went to a Technical High School to study Electronics.  As there was no High School band to join, Lou took matters into his own hands and co-founded and booked his own group starting his professional career at the age of 13.

After achieving his High School Electronics Diploma and an ASEET Degree, Lou started a career in the IT industry, but his love for drumming continued to grow as he remained active as a Professional Musician as well.  Occasionally, he would even fill-in and teach at his Dad’s Drum School, but his focus was on playing.  With the passing of Jimmie Stavris Sr. in 1996, Lou decided to get into web design specifically to developed a dedication website to his late Father.  As word spread about the Dedication Web Site, many former students, famous drummers, and customers of the original Drum Shop asked if Lou could get them equipment just as his Dad had done for all those years.  After additional study and development of a business plan, Lou decided to take his website to the next level and  DrumChops.com was born!

As a full-service On-Line Drum Store that could drop-ship equipment anywhere in the US allowing secure On-Line payments and personal customer service was achieved it was a great sense of pride for Lou.  In a time when few if any music stores sold On-Line, DrumChops.com was a technical leader and at the same time continued the family tradition of providing high levels of customer service just as the original Jimmie Stavris Drum School & Shop had done for all those years!

Lou went on to start a family, and continue building his career as an IT Professional, but playing locally and continuing to run DrumChops.com remained a priority. Even as he continued his college studies achieving a BA Degree in Management and an MS Degree in Information Systems, running the On-Line store always came first.  Unfortunately, it was only a matter of time before the “big-box” stores entered the On-Line market.  This made it impossible for DrumChops to remain relevant as an E-Commerce business.  Changes to the business plan had to be made, and in 2007, Lou moved to Surprise, Arizona and opened The DrumChops Drum School.

The original DrumChops.com website remained up and running to keep the Jimmie Stavris Sr. Dedication page available, but the store was no longer in operation.  In order to start fresh and build up the DrumChops Drum School,  Lou created other Web sites to specifically promote the School and Forte Music Publications.

Social Media was taking off and learning to developing a presence on Facebook and YouTube became important to promote the Drum School as a local business.  Again, Lou learned the skills necessary such as Audio/Video Recording and Editing, Social Media Marketing, and Video Conferencing to utilize new On-Line resources such as Skype to develop a local following and build up the school.  These efforts were rewarded as Lou became a member of the Vic Firth Drum Education team and the DrumChops Drum School began to grow.

Since the first DrumChops Drum School opened in 2007, Lou’s experience as an instructor has continued to merge with his technical abilities and the result was a new studio built to take full advantage!  The current DrumChops Drum School studio now includes Sound Proofing, Digital Workstations, multi-camera setups, Internet Connectivity, and a networked library of personal educational materials, CDs, DVDs and multiple Professional level acoustic drumsets and percussion instruments allowing a whole new approach to teaching.  All educational materials are scanned and turned into PowerPoint presentations with embedded audio/video so lessons are taught with all materials in the DrumChops Library just a click away.  The flexibility to move from stick control to groove study, or charts is always available, and the additional cameras and monitors allow Lou to give students a clear view of what he sees as an instructor by providing close-ups of hand/foot technique issues seen from the teachers point of view on monitors easily seen by the student.  In combination, all of the added technology that went into developing this new studio design has greatly increased opportunities for the student to play along with the Instructor on a whole new level and has also opened the door for On-Line Lessons done in the same “LIVE” One-On-One Private configuration as if the student was right there in the studio!

In 2018, a full redesign was completed of the DrumChops.com website that combined all other sites built over the years.  This allows a single domain to house all information about Services provided at the DrumChops Drum School, which have been expanded to include:

An updated Dedication Page to Lou’s Dad Jimmie Stavris Sr. with additional pictures from the Stavris Family personal collection was added along with a separate expanded Guest Book with more entries received over the years.

A full intuitive Video Index was also designed for easy access to all of Lou’s Drum videos and is now featured.  The new Video Catalog now includes close to 50 Free On-Line Lessons, Solos, Demonstrations, Drum Covers, and personal family videos that are posted on various Social Media and web sites all easily accessed from one page.  All of these videos have been recorded and edited by Lou to insure the quality of material and how it is presented.  As an added feature, Lou has collected some of his personal “Favorite Finds” from YouTube and other web sites that are now included in a separate section of the Video Index Page.  Again, all of this great content is easily available from the DrumChops.com Web Site and additional videos are constantly added, so be sure to CHECK OFTEN!

Finally, a full detailed section dedicated to Forte Music Publications and the fine educational materials Nick Forte has produced is featured.  This provides access to detailed information on books used exclusively at the DrumChops Drum School, the author, and contact information for purchase!

DrumChops.com has come a long way since it was just an idea to preserve the memory of a Legendary Teacher and Great Father!  With the Web Site redesign, Lou Stavris continues to create intuitive ways of communicating the services offered at the DrumChops Drum School, and provide a detailed overview of new and innovative teaching techniques he continues to develop.

Lou often talks about how he feels his Dad did not just teach him how to play, but he was blessed with being taught how to teach The “ART” of Drumming as well!  Given the success of the school and the positive feedback thus far, it is Lou’s hope to continue to expand the DrumChops Drum School and its On-Line presence to continue to serve the Drumming community! 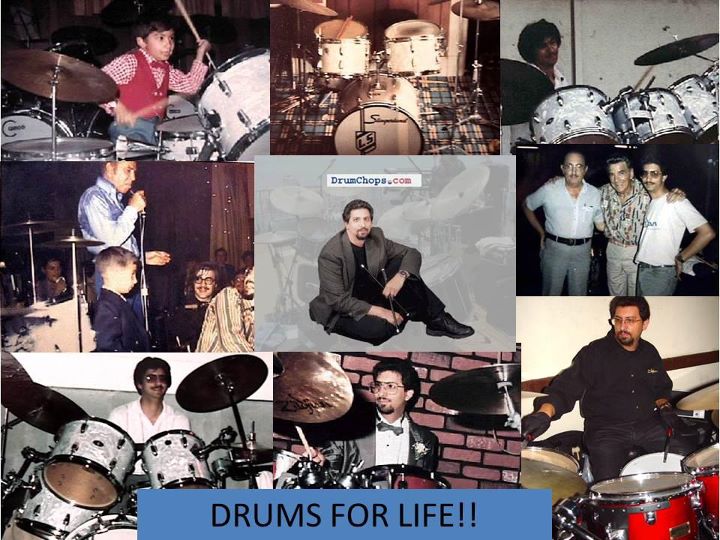