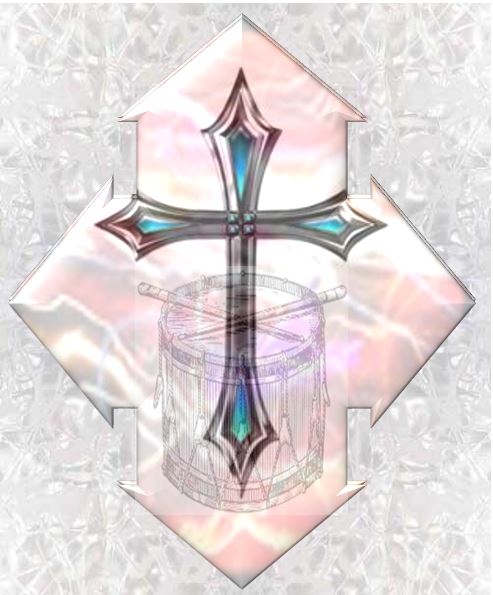 Jimmie Stavris Sr. was born and raised in New Haven, Connecticut. The son of Greek immigrants, Jim soon realized he was not “cut out” for the family restaurant business, and found his love of Drumming!

His first instructor, the legendary J. Burns Moore taught the art of rudimental drumming with a heavy hand. Jim often told the story of how Mr. Moore would disapprove of a lesson that was not done correctly with a stern smack on the knuckles with his 3S sticks. Throughout his teens, Jimmie continued to work on his craft, and the culmination was a “gig” on the road with the Johnny Long Orchestra. Jim was also a veteran of The United States Navy and served during The Korean War. After the war, he decided to continue his study of Music at the Hartt School of Music where he studied under the world renown percussionist, Alexander Lepak. From that point on, Jimmie and Alexander Lepak were very close. It was the instruction theories taught by Mr. Lepak that led Jimmie to his true calling…. Teaching the “Art” of drumming!

Jimmie Stavris Sr. began teaching drums in 1958, and could only be stopped by a failing heart that caused his death in December of 1996. In almost Forty years of teaching, it is estimated that Mr. Stavris touched the lives of over twenty-five hundred students. During this time, he was also the owner/operator of the “Jimmie Stavris Drum School and Shop”, which consisted of a small studio, and a little shop where he sold drums and supplies. Countless numbers of local drummers came to know the small shop as a place to get a fair price on top quality equipment, as well as find that small but important part that nobody else would carry. This was really the essence of the Drum Shop, it was more of a service for the drumming community then a serious attempt to make a profit, and the result was a small but loyal “family” of drummers. Jim’s extended family was very important to him, and was a driving force throughout his adult life. Only his Wife, two sons, and immediate family meant more.

His gift of drumming was very strong with both sons. Jimmie Stavris Jr., became a spokesman for the town of East Haven, Connecticut during his High School Career, as he represented the town, and eventually the state in several accomplishments surrounding his drumming. Jim Jr., made All State two consecutive years, as well as being selected to both The McDonald’s All American High School Band and The United States Collegiate Wind Band. A “chip off the old block”, Jim Jr. clearly showed the talent and work ethic to carry the family name as a World Class drummer. The second son took a different path, but studied under Jimmie Sr. as well. At the age of thirteen, Lou Stavris began playing professionally with a duo that he co-founded and booked. Lou worked at both the music and business side of playing drums and soon developed a reputation that was worthy of the family tradition. Perhaps the most celebrated student and family member is Nick Forte. As Jimmie’s brother-in-law, Nick began taking lessons during his teens, and has gone on to play and teach professionally with a variety of Jazz legends. Nick has also authored several drum method books and has had several articles published in both Modern Drummer and Down Beat Magazines.

The legacy of Jimmie Stavris Sr. is that of his family, students, and all those that can say that the music is better because he shared with them his gift as a drummer and teacher. As his son, I have seen and shared in this gift first hand, and this is why I have dedicated this page to him…. 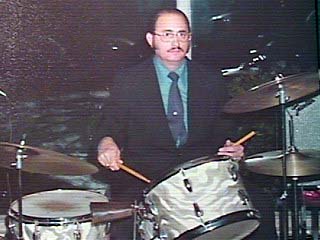 Please enjoy these selected photos of Jimmie Stavris Sr. – From the personal collection of the Stavris Family 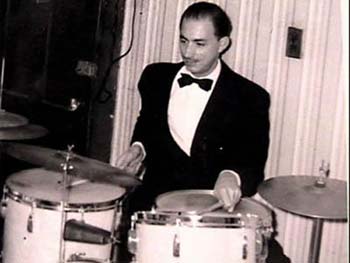 Circa 1950’s this is one of the earliest photos in our collection of Jimmie playing a full drum kit. 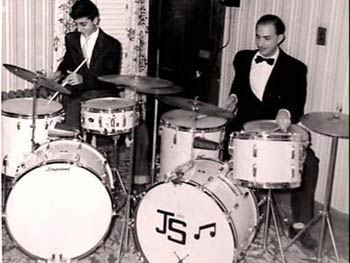 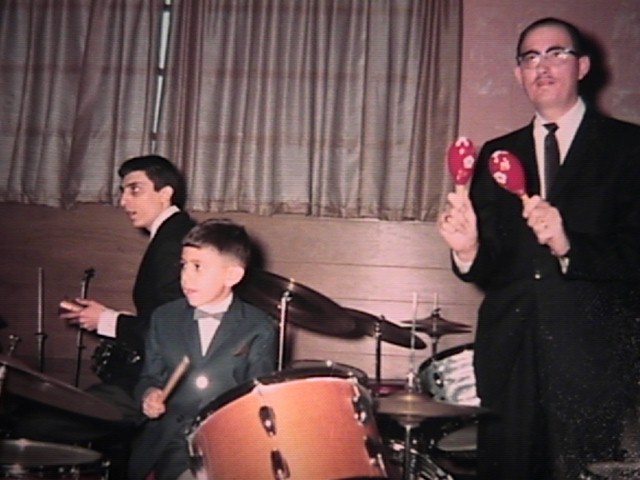 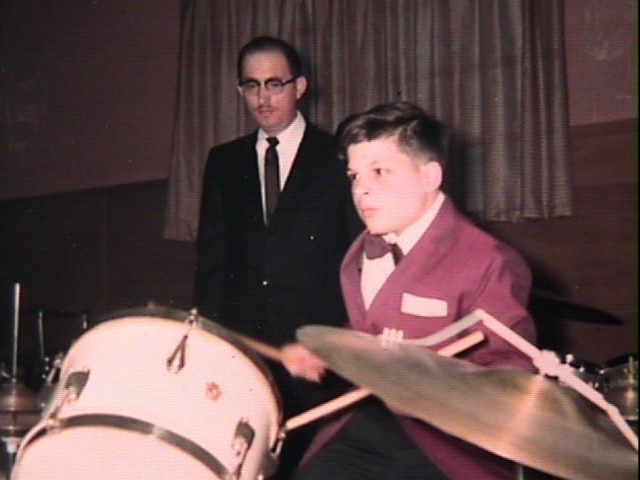 The Jimmie Stavris Drum School was known for Jim’s innovative techniques.  Here, Jim is looking on as a young student solos at one of the school’s annual drum recitals. 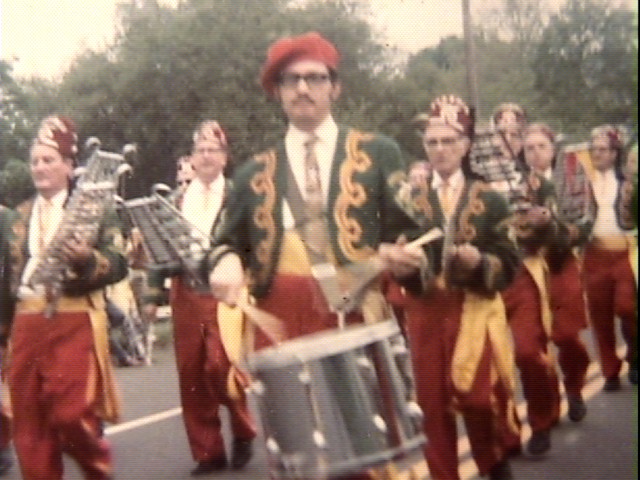 Jimmie Stavris Sr. also contributed to local charities. Here, Jim is seen marching with the Shriner’s Drum and Bugle Corps which he supported with reduced rates on lessons and equipment for many years. 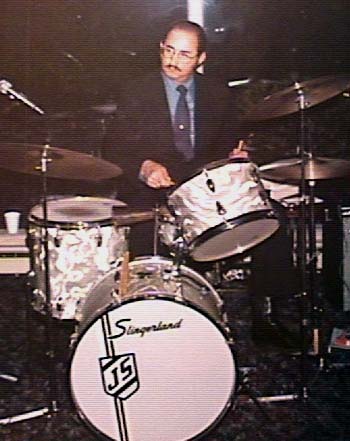 Those that knew Jimmie Stavris Sr. knew he was at his best behind his drums.  This classic photo of him with his signature Slingerland White Satin Drum Set is a fond memory! 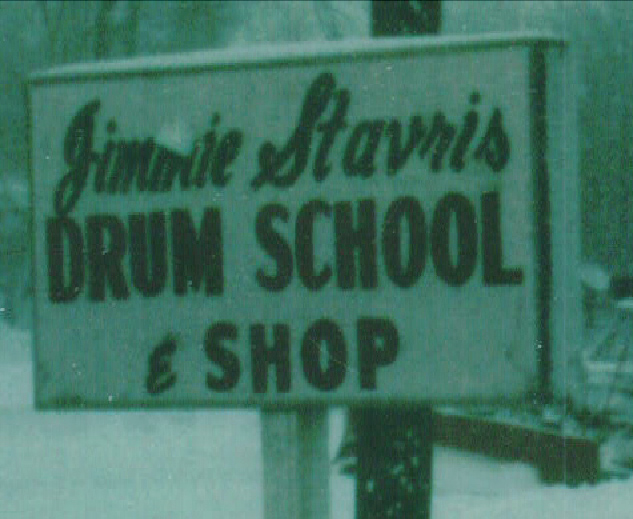 The Original “Jimmie Stavris Drum School & Shop” Sign that stood in front of our home on Townsend Ave. in New Haven, CT is somewhat famous at this point.  It was the first thing that so many of Jim’s students saw each week when they came in for lessons.  I’m glad this photo has survived!

In 1989 the Stavris Family traveled to California and met with Jim’s college buddy Joe Porcaro,  Who was working on a project with Louie Bellson! Meeting both on this trip with my Dad is a special memory! 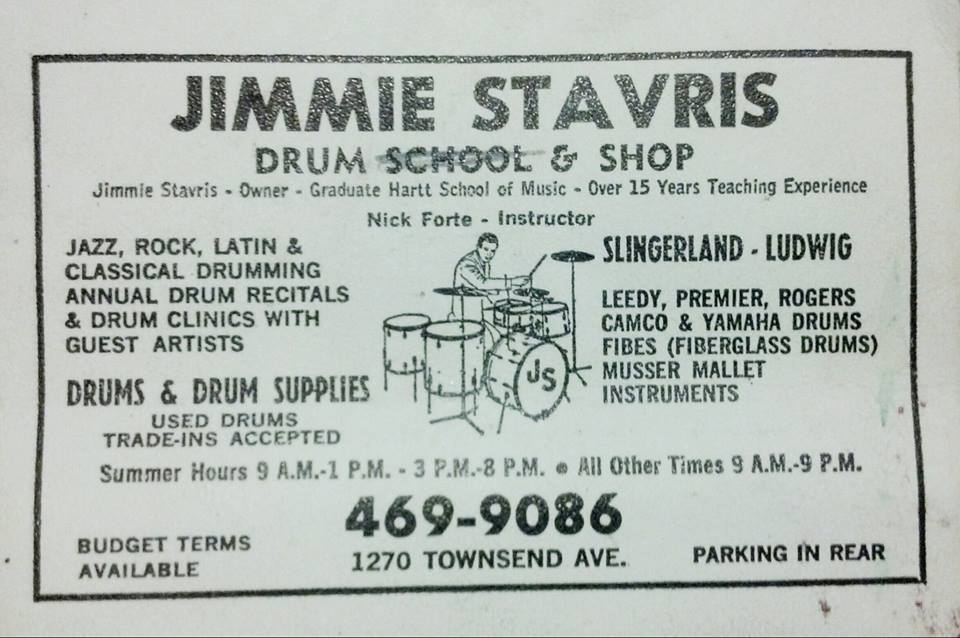 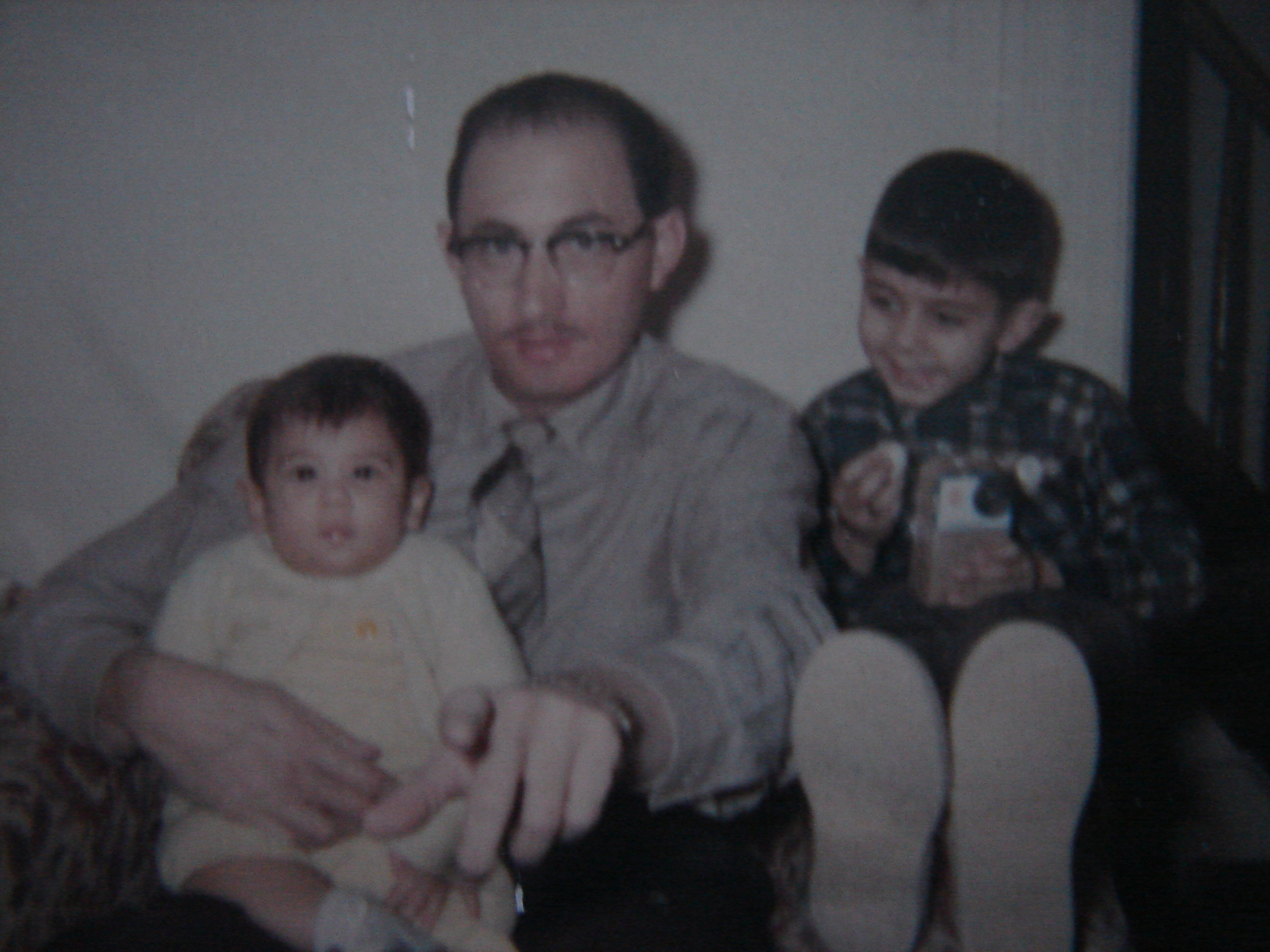 Here is an early family photo from the mid-60’s.  That’s Lou Stavris sitting on Jim’s lap and Jim Jr. chilling out next to Dad! 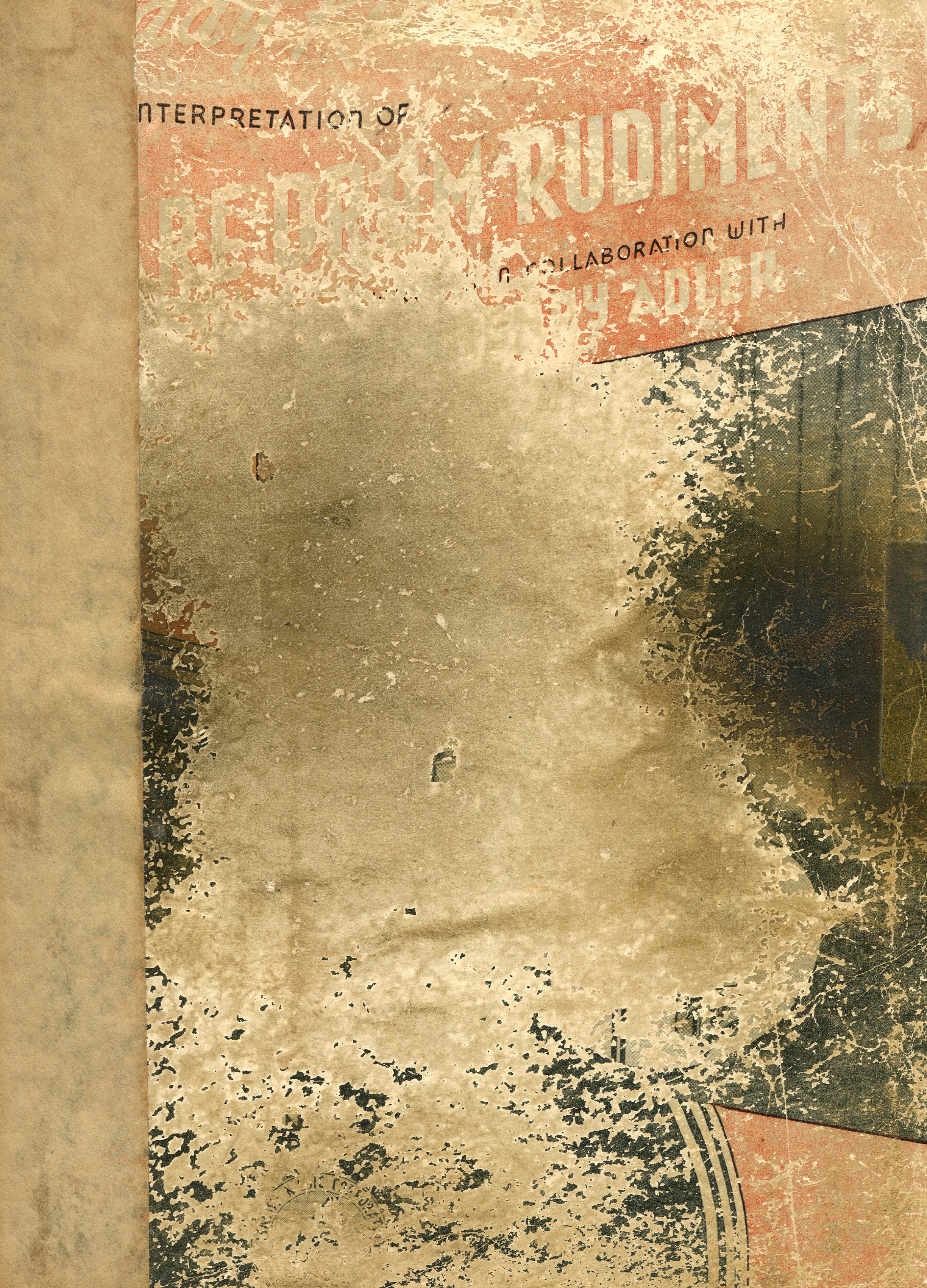 After 40 years of teaching, this is what your Buddy Rich Book looks like!  Jim always kept his copy next to him while he taught and often referred to it.  This will open the flood gates of memories for literally 1000’s of students! 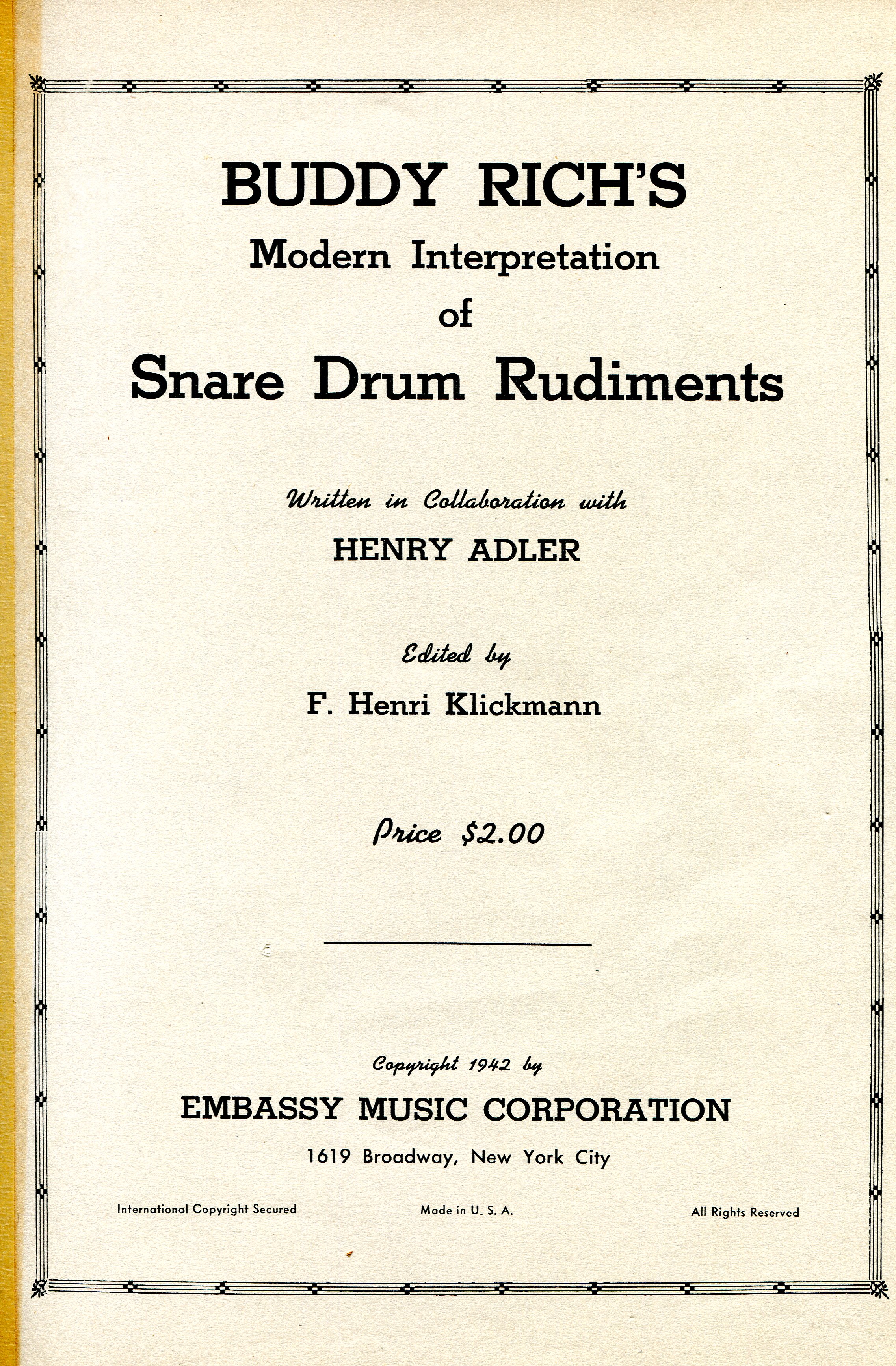 This is the inside page of the book Jim kept next to him while he taught! 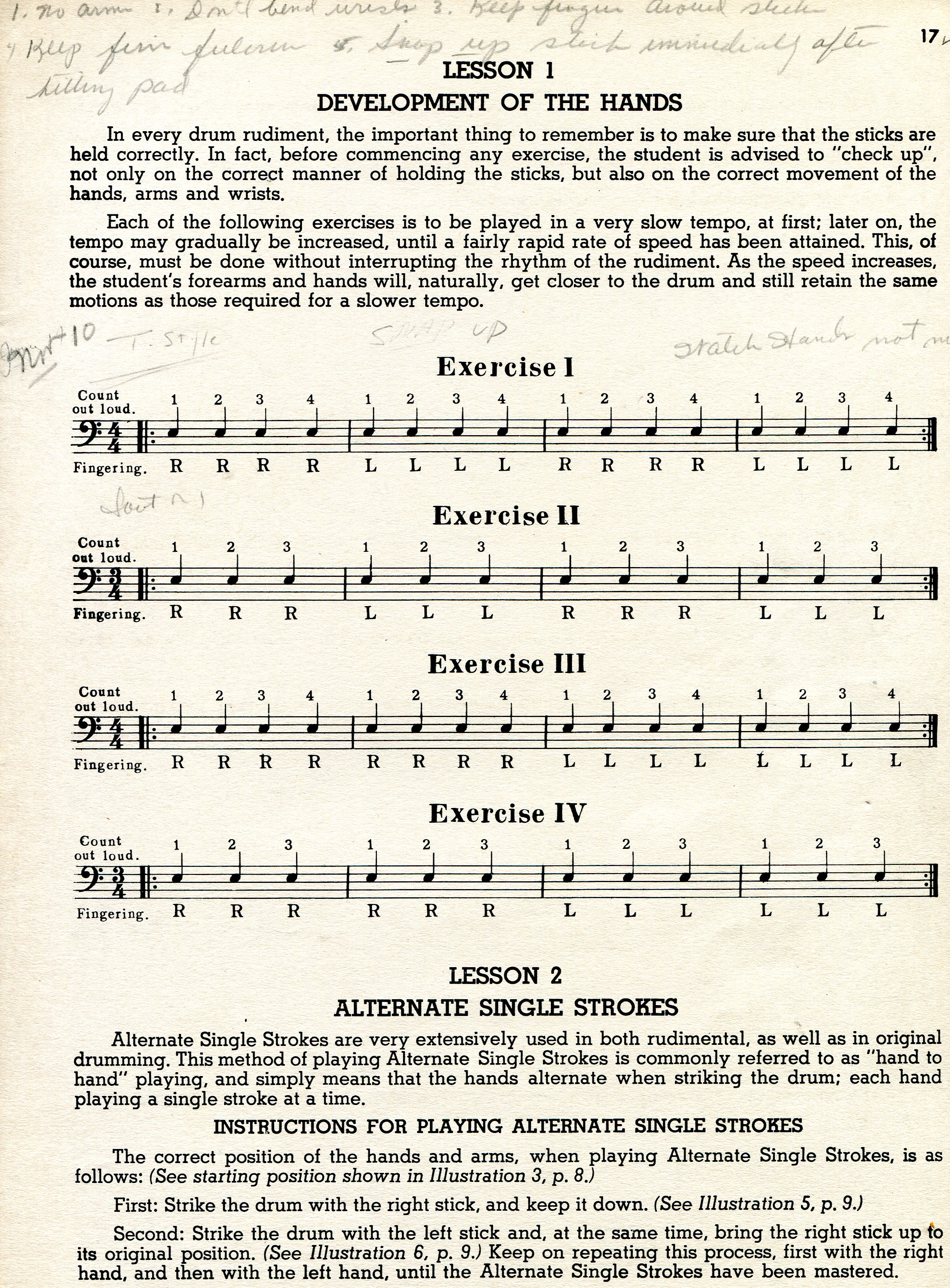 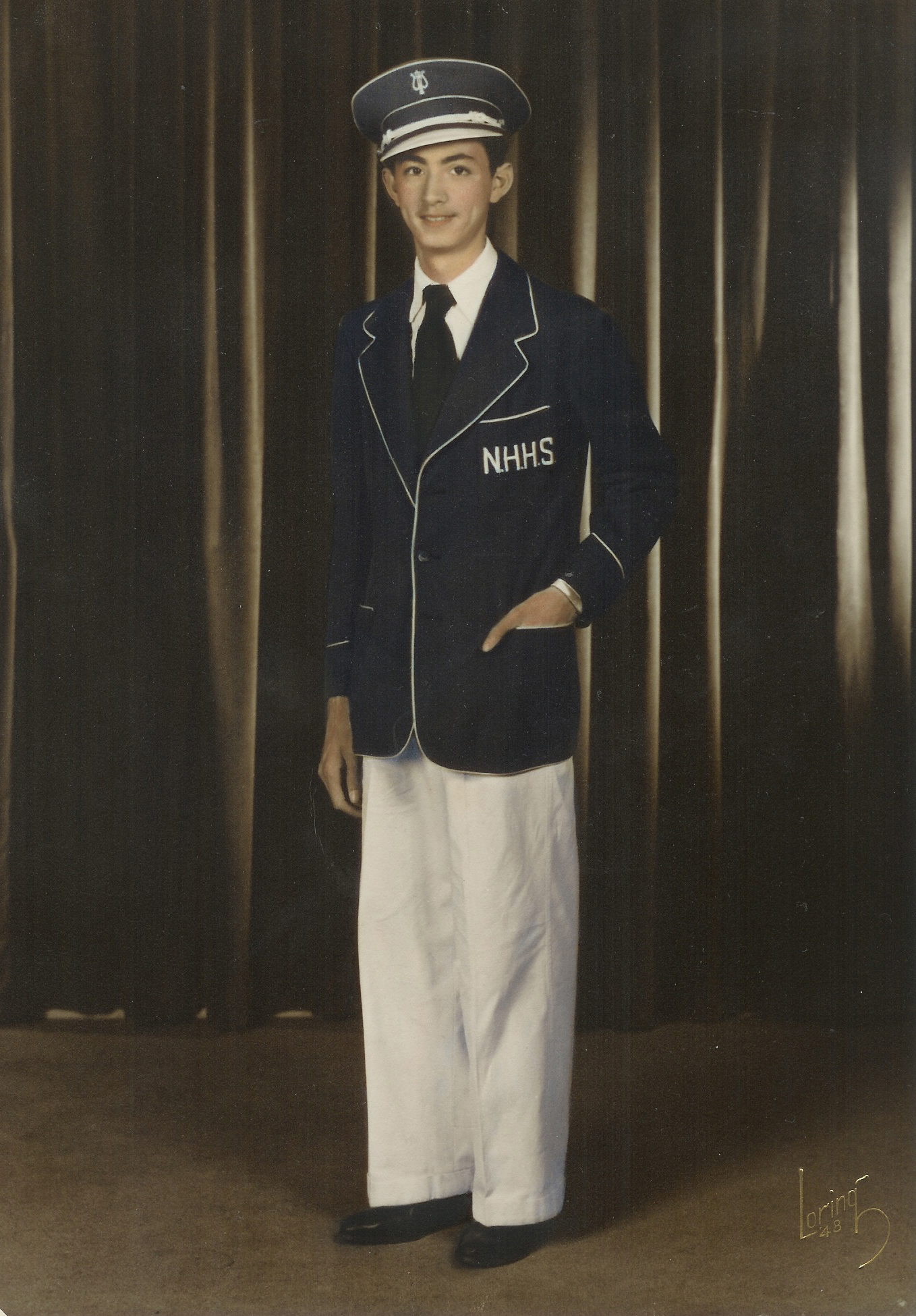 Here is a young Jimmie Stavris (before the Sr.) in his High School Band Uniform. 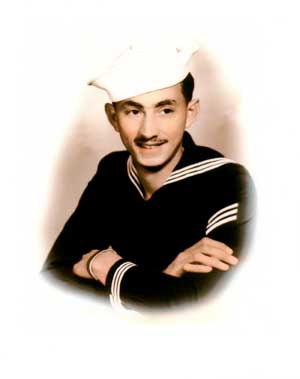 Jimmie Stavris did not like to talk about it, but he was a veteran of the United States Navy, and served during the Korean War.

Jim was surprised by his family and friends with a Birthday celebration.  As he turned 60 and looked around the room, many of his musician friends, students, and family came to honor him.  In the background, his Son Lou’s band StarLite provided the entertainment.  It was a very special occasion! 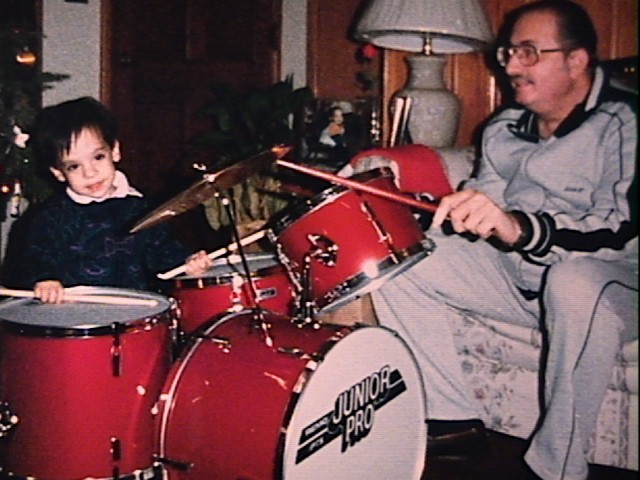 Jimmie Stavris Sr. was blessed to have been able to share in the early musical instruction of his Grandson, Brendan Stavris. 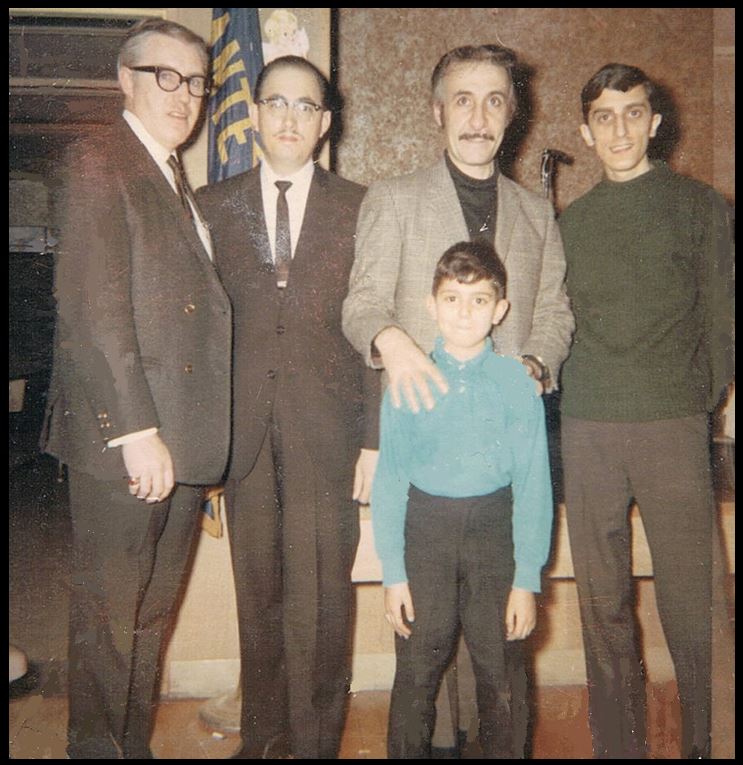 Jimmie Stavris Sr. would bring famous drummers in for clinics as often as possible.  Here is a photo after Joe Cusatis performed.  From left to right is I believe our Slingerland representative at the time, Jim Sr., Joe Cusatis, Jim Jr. standing in front of Joe, and Nick Forte. 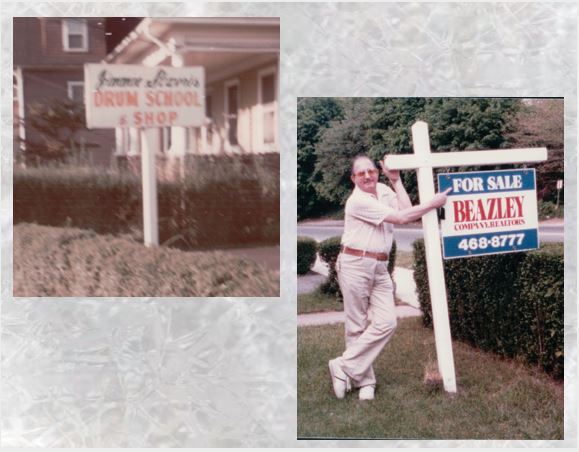 After years of running the Drum School & Shop out of his home,  Jim realized his dream of opening a more traditional store.  This marked the end of one historic sign and the beginning of life split between “Home & Store”. 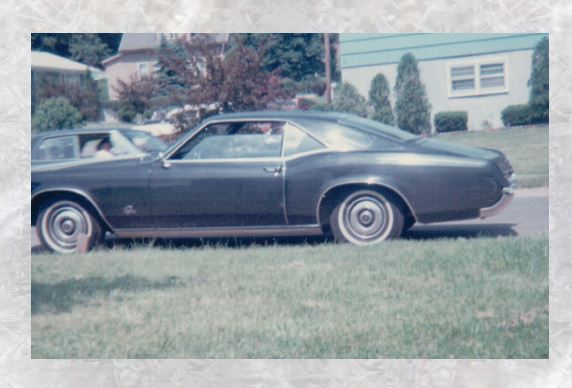 Jim was all about Music, Drums, & Family but… He really was proud to have been able to afford his 1967 Custom Black on Black Buick Riviera. 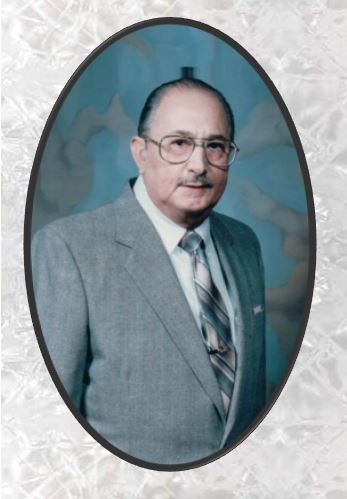 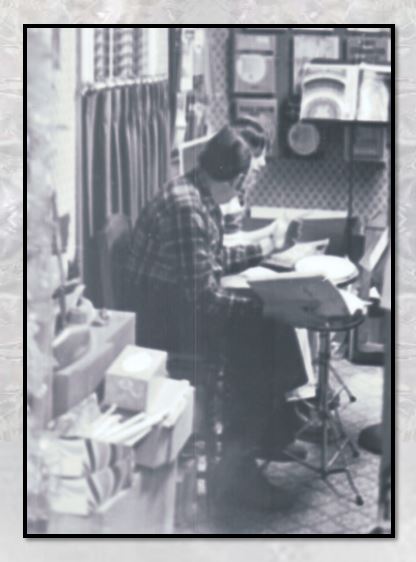 For many students, going to their weekly lesson was like a special occasion.  Jim was a dedicated teacher with great talent and patience.  This photo captures what he really LOVED to do! 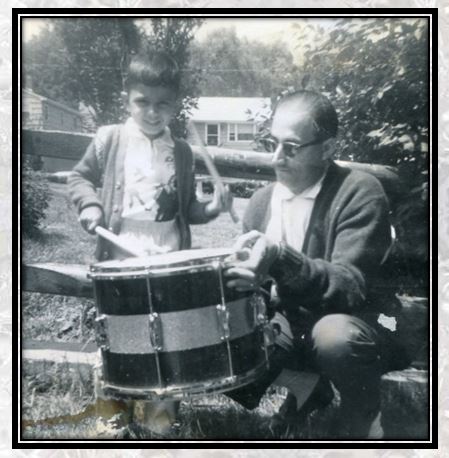 An early photo of Jim Sr. providing instruction to his oldest son Jim as he plays on a marching drum Dad held up for him. 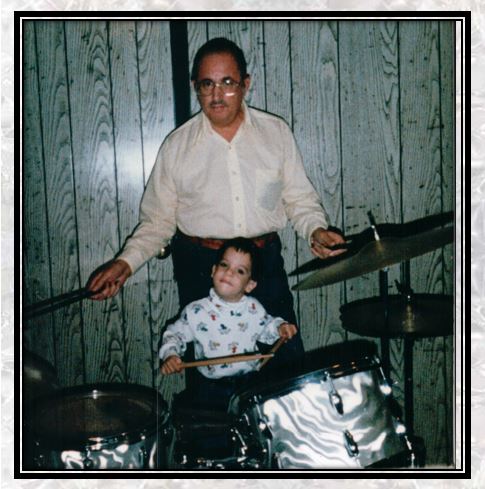 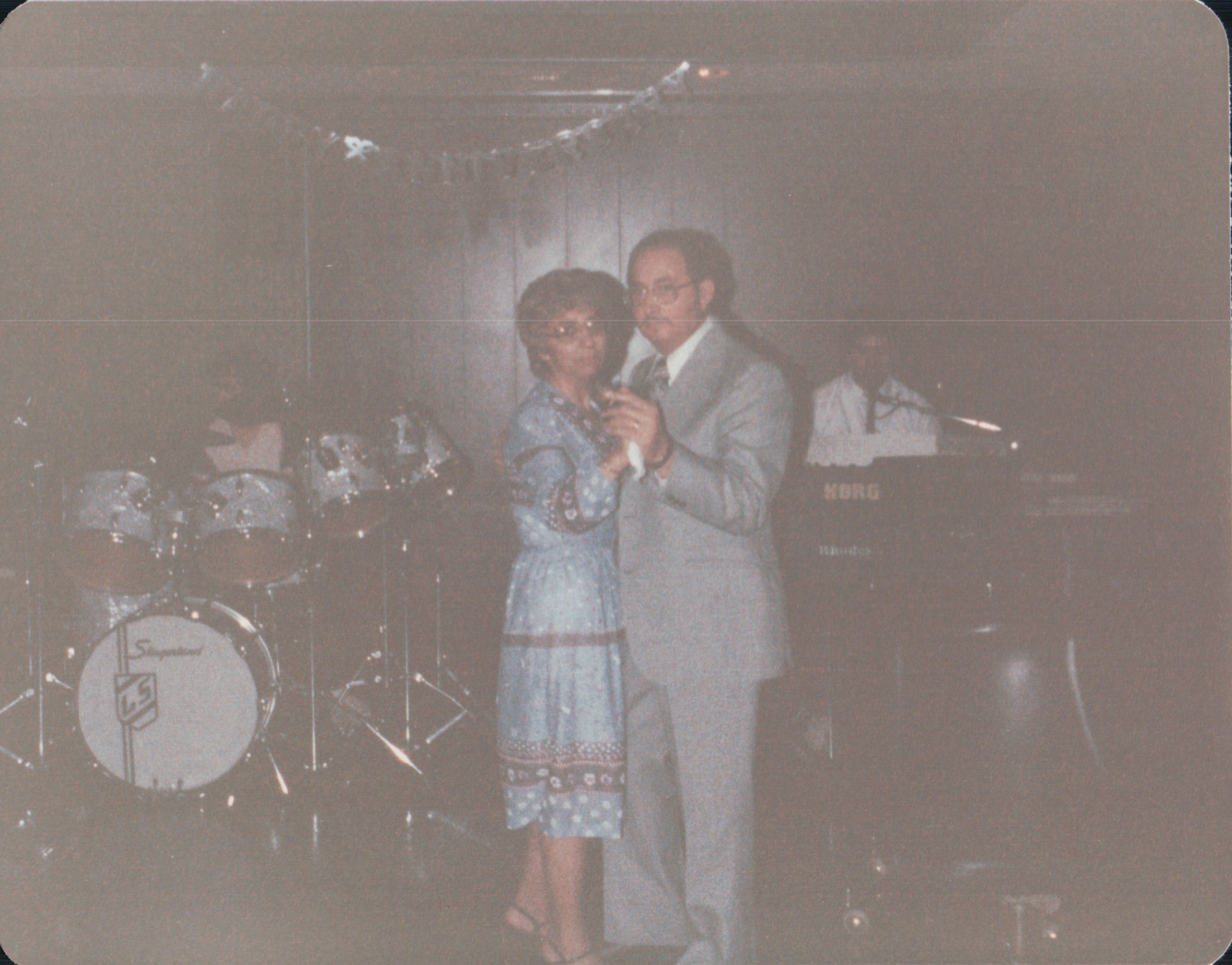 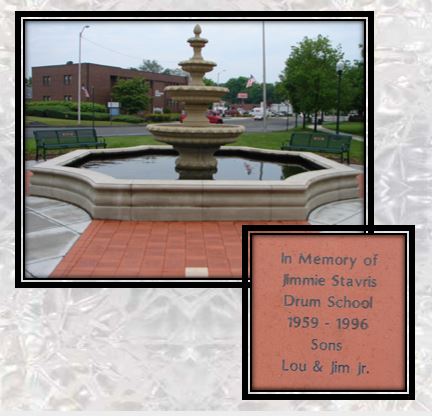 In the Center of East Haven, Ct. sits a special memorial fountain.  The brick foundation is filled with dedications including this one to Jimmie and the Drum School from his Sons Jim & Lou 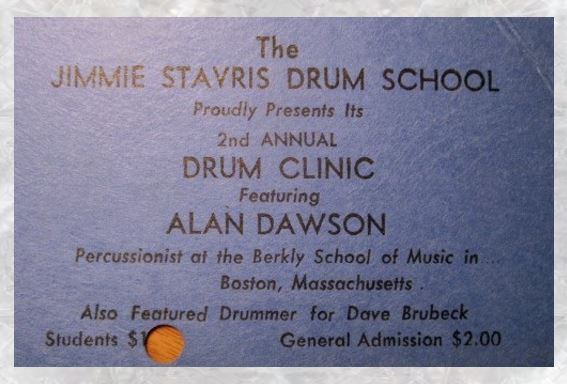 The Jimmie Stavris Drum School & Shop provided clinics given by top drummers to students as well as other local musicians.  This is a ticket stub for the Alan Dawson Clinic.

Information on Al Lepak, Jim’s Percussion instructor at the Hartt School of Music. 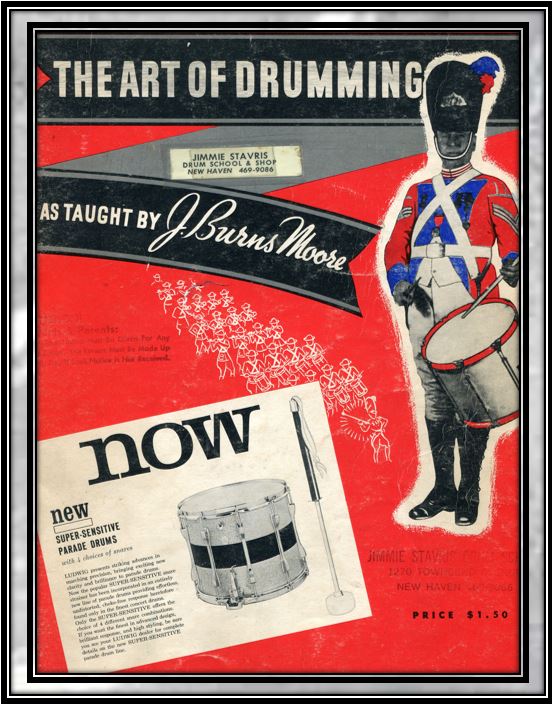 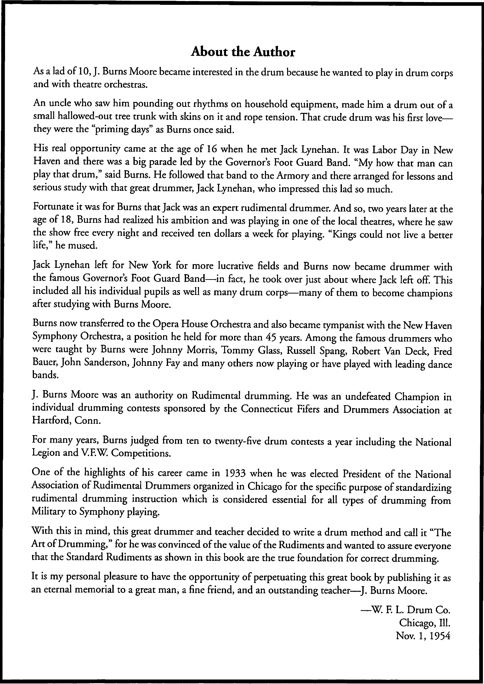 A Bio of Jim’s first Drum Teacher, J. Burns Moore from his book “The Art of Drumming”!

The following article appeared in the April 1998 issue of Modern Drummer ON-Line Magazine. I am reposting it here for those who did not get a chance to see it at the time. I would like to thank Modern Drummer for recognizing the contribution that Jimmie Stavris Sr. made to the drumming community during his career and the legacy he left for those that had the pleasure of knowing him!

“The drumming education community recently observed the passing of master drum teacher Jimmie Stavris Sr. An inspiration to many drummers, Stavris spent his entire life promoting drums and drumming. He was sixty-eight. Over the course of his thirty-eight-year career, Stavris instructed more then 2,500 students in the northeastern US, many of whom are drumming all over the world to this day. Included among his students was Nick Forté, who has contributed many articles to Modern Drummer. Stavris himself learned from drumming luminaries such as Al Lepak (with whom he studied at Hartt School of Music) and Burns Moore. A dedication Web site (www.drumchops.com) has been set up to honor Stavris, and to give those who knew him an opportunity to reflect on his enormous contribution to their drumming pursuits. A special guest book page has been added to accommodate comments from the many people touched by his talent.” 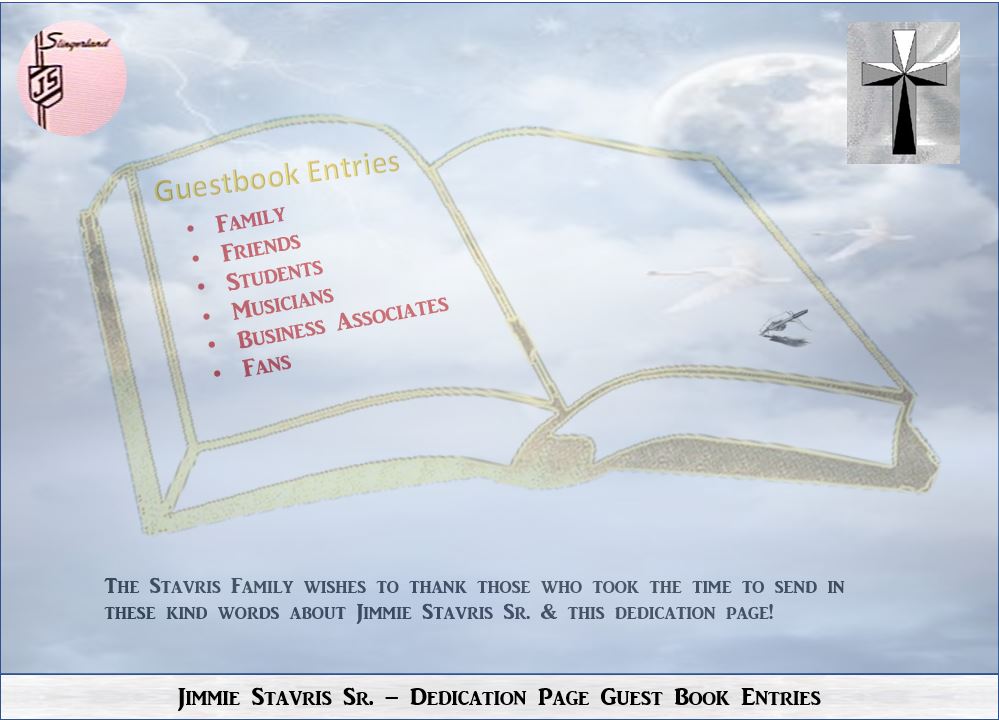 I’d like to thank all of the following people that have taken the time to either fill out my survey form or send me email with comments about my dad, or the dedication web page. I’d also like to thank organizations like Modern Drummer and PAS for taking an interest and helping to get the word out about Jimmie Stavris Sr., and the page.